For the pre-production I had to research editors that inspire me and what type of editing I may want to use during the interview. Some film elements I looked at to possibly use in our interview are split screens, dissolves, matching audio segue, and intercutting. The split screen can be used when we’re showing a clip of the movie and a clip of Jasper talking about the movie. Dissolves may not be super useful in the interview but it’s a good option to use for softening the cuts between the interview and Citizen Kane, it could be used right after we introduce the film and show the first clip of it. Matching audio segue will be used when we’re fading from Jasper talking to an important talking part in Citizen Kane, this makes it less abrupt so the cut isn’t as obvious. Intercutting is when “two scenes are shot in sequence, but presented by cutting back and forth between them.” This makes it seem like the two actions are happening at the same time but in a different location, I’m not sure how this can be used during our interview, but I would like to try.

Matthew, our cinematographer had me sit on the stool pictured in front of the backdrop to see which lens he like the best and where he wanted the camera placed. 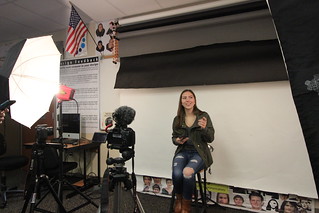 The camera directly in front of me is the longer focal length for straight on shots, and the one to my left is a shorter focal length (50mm) for side shots.

We planned to film after school so we can use the black backdrop and all of the lights that Matthew (cinematographer) has. We also talked about using different focal lengths, one closer in for side shots and one with a longer focal length for straight on shots.

We did not have the screenplay finished and our cinematographer didn’t want to make a storyboard when he didn’t know what we were going to be filming.

There are programs you can buy to sync the audio for you but they’re extremely expensive. The best way to do it on a $0 budget is to use a clapperboard or have something that makes a loud noise so that you can find the different clips of audio & sync them together cleanly. Another option is to use a free audio software (Audacity) to sync two different audio sources together by the millisecond.

I learned that it is much easier to sync the audio up than I thought it would be; it’s tedious but doable. I also learned that the amount of thought that goes into every edit is incredible, I knew that every edit meant something but I never fully understood what the effect of the edits were. We didn’t really run into any problems, especially on my part, I didn’t have any outstanding issues.