In our group, we talked about possibly having a montage to show the beginning part to build suspense. Mise-en-scene is obviously going to be a part in our film, we are going to have a lot of time in the film where the camera is moving and we need to have the scenes blocked out so all of the elements stay in frame. Intercutting will also be used in our film because there will be shots back and forth between me and Jasper & Matthew stalking me; each of us will have action going on being cut together. We also want to try split screens, which will be more tricky than I expected, but with Aaron’s help I think they will come out well. The split screens should add suspense and comedy to our film.

For test editing, I wanted to try doing a montage because I know that’s something we’re going to try incorporating into our film. I did this montage of the funniest out takes from our last project. I chose to do funny ones because I know we want the montage to be kind of serious then have comedy breaks, enjoy! 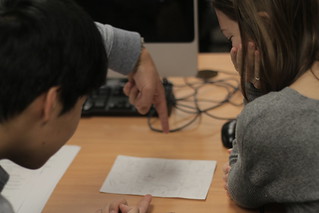 This is Aaron & I working on the storyboard. We talked about where we thought the cuts would fit and where we wanted them. 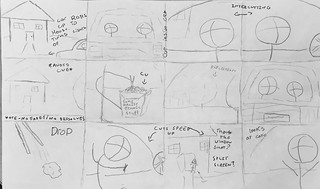 This source has every single question you could ever have about Final Cut Pro. It even has a section that compares the iMovie program to Final Cut Pro. Aaron is also going to be helping me with the program because he knows a lot about it as is and learning hands on really helps me.

I learned that it is much harder to come up with ideas for screenplays than I thought, thankfully our group is very creative so it only took two-ish days of brainstorming. My role in the group during brainstorming was to be the realistic one, we had some really funny ideas as we were going and someone had to tell the crazy boys the good from the bad.